Galaxy of Stars - Housekeeping and Updates

November 21, 2015
I want to catch you all up on what we have so far. Also, I've received requests and questions from several bloggers and I have NO WAY to answer you because your email comes in as a "no-reply" comment. For example:

Pamela had a wonderful comment about how she has all of her fabrics and plans on finishing the quilt in 2016. She's made several blocks already. But I had no way to get in touch with her and tell her "Kudos, Pamela!"

Do you see what I mean? If you don't get a question answered from me within a day or two, it's probably due to the fact that I can't get in touch with you. Remember my email: kratovil@his.com. Yes, I made that public! You can always write to me there with Galaxy of Stars (or whatever blog topic) in the subject line.

Now for the blocks so far:
The Galaxy of Stars page (navigates from a button at the top of my blog):
http://debbykratovilquilts.blogspot.com/p/galaxy-of-stars-bom.html

Should be current. I was notified that the link I gave in the November block for the extra Sawtooth Star Variation was broken. Again, I couldn't get back to the commenter because it was a noreply-comment.

I added the Sawtooth Star Variation block as a separate post November 15. There is a picture of the block from the quilt and the link to the pattern:

Next week, before Thanksgiving, I will give more info on my upcoming 2016 Block of the Month projects. I actually have a page that shows all 12 of the projects that are based on my Quilter's Block a Day calendar. 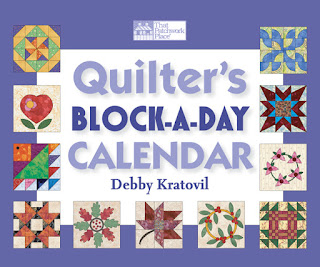 Would you like to see them? Would that help you decide if you want to participate? I also have several quilts from when quilt shops offered it, but those won't be revealed until the appropriate month.

And remember, I am also offering patterns for my Adinkra Quilt:

And the first Adinkra Quilt I made (and since gifted):

Block of the Month Free Patterns Galaxy of Stars BOM