Anatomy of a Quilt: Day Two

January 08, 2020
More parts explained! Here's my quilt example and a few more defining terms. Once we stitch a block (pieced or appliqué), we can "tilt" it so the points of the four corners are North-South-East-West.

Today I want to talk about BLOCKS ON POINT. Here is a simple, single block that is turned 45 degrees. I call it Four Buds and it's from 2002. I think I paper pieced this.

Here's what the block looks like before it was turned on point:

The addition of four CORNER triangles cut from TWO squares sets this block as shown above. There is a formula for doing this and I've shared it here several times before. You can find it again further down this page.

What about setting a block not quite on a 45 degree turn? I call this my Tilt. These squares use a different angled triangle. If you have a Tri Recs ruler set in your sewing room, the Recs ruler is what I'm referring to. "Rec" refers to half a rectangle. Let's see some of those Tilt quilts.

Those block centers are squares. The triangles that surround them are about 56 degrees. Four of them of the same angle tilt left; four that are mirror image triangles tilt right. The resulting blocks become bigger squares.

Here's my first Tilt quilt (from early 2000). As you can see, all the squares tilt in ONE direction.

And some recent Tilt quilts:
How about the panels from a soft book? This also was donated for a local charity which gives out quilts to little children.

I have more, but I think you get the idea!

Here is an OLD quilt with vintage appliqué flowers and baskets. They were received in the Quilt Magazine office for a block contest and my editor asked me to create a quilt with them. Five blocks set on point with simple side and corner triangles. And, yes, there is sashing separating the blocks.

And how about only four basket blocks set on point? The addition of a fifth plain square is needed in the center. No sashing here. This obviously was NOT quilted by me! The longarm quilter worked her magic in those light green triangles and square!


In both these peach/green quilts there are TWO sizes of triangles needed to set these blocks on point. The side triangles (which are larger) and the corners (smaller).

Here is my formula sheet. This is a magic sheet! Those mathematical formulas are accurate and work every single time! The parameters of this blog prevents me from putting a pdf here, but I think this is readable! 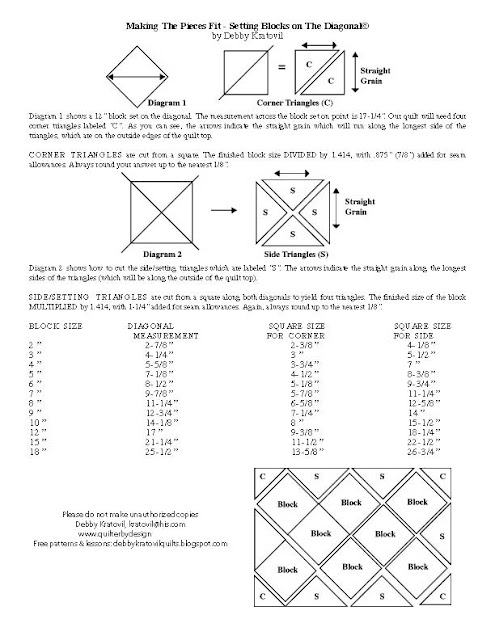 So, let's look again at my digital Anatomy of a Quilt. The center row shows the two types of blocks set on point. The pieced block is set at a 45 degree angle. The hexagon block uses the Tilt angle.

And now for a show of several more quilts with blocks on point. They never get shown anywhere anymore. They have been given away and they would be so pleased to know that you enjoyed seeing them!

Printed panels of Baltimore Album blocks made this quick and easy.

Basic Pinwheel blocks steal the show when the setting fabric is plain.

Simple appliquéd circles and squares in squares are my Spiroglyphics quilt from mid 2000. It was a popular workshop. Notice that the side and corner triangles are two different colors!

Sunshine Butterflies from early 2000 is a variation of a Drunkard's Path block. This is one of those quilts that's hanging on the Giant Quilt Rack in the Sky. This time I added sashing strips between the blocks. We will be talking about sashing strips and cornerstones in my next post.
I hope you got the picture of what I mean when I say a block is on point. My quilts thank you for letting them show off!