I received a collection of fabrics in 2013 from Ana Griffin called Chinoiserie. One of the prints was so exotic looking. It's the one with that regal pheasant sitting on her cage. I still had some of it left. 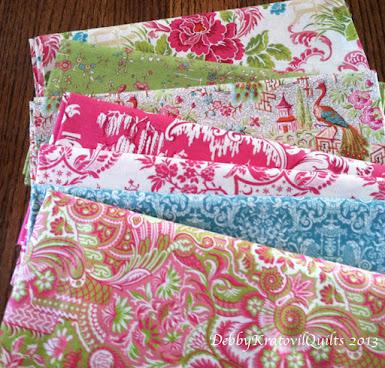 I used it in this quilt which I gave to a neighbor who was given a cancer diagnosis. She was thrilled to have such a beautiful quilt to snuggle under. I used the pheasant print to set my One Block Wonder blocks. 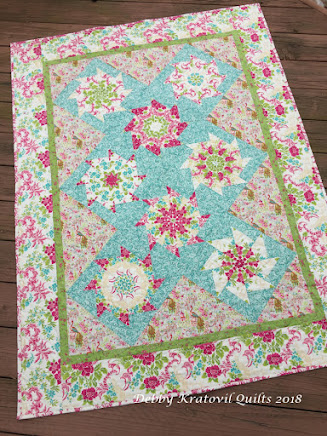 I made this pentagon wreath last year and it was looking for a special motif for the center. I remembered that pheasant print. I stitched the wreath onto the centered print and then trimmed it away. Now it's ready to be attached to the green background square.

Then I stitched it to the green square and trimmed away the excess from underneath.
Here's my block! Now, what was I going to do?
I pulled out more strips and decided to begin surrounding it as I've done with several other unique blocks, orphan blocks, etc. This is what I have so far. Strips and corner squares will be added until I'm pooped out!

And one more orphan block that I discovered some companions for. But I love this fussy cut center motif, don't you? 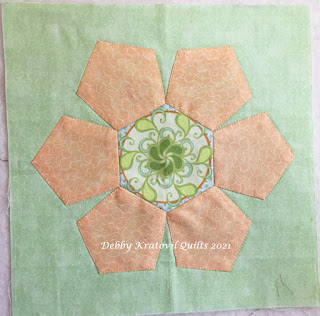 Hope you enjoyed Pentagon Week. I've got to think of some more themes. I kind of like these, don't you?
English Paper Piecing pentagons

Popular posts from this blog 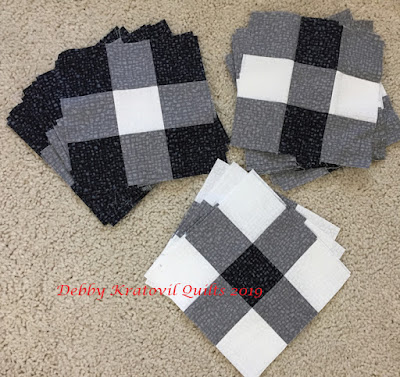 It's been a few weeks since I shared my gingham blocks. I decided to go bigger and added an extra vertical and horizontal row of blocks so that this could be a nice lap sized quilt. I'm using the blender collection of Bedrock by Windham Fabrics . Remember the blocks? You can see my cutting and piecing on my April 24 post . Sets of 3 different 9 Patch blocks using white I had initially made these using the cream: Sets of 3 different 9 Patch blocks using cream When I began to put these together, I realized that I could combine the two sets to make a larger quilt. No kidding! You honestly can't tell the difference, can you? I shot this picture outside on my deck. We've had days and days of rain, so this was the only semi-dry spot. Will get another one soon. Here's the quilt and you tell me where the cream and where the white blocks are! Of course, it doesn't help that you can see through the top. Gingham quilt top: 6 x 6 blocks. 50" x 50&q
Read more

Kaleidoscope Quilts and a FREE Pattern 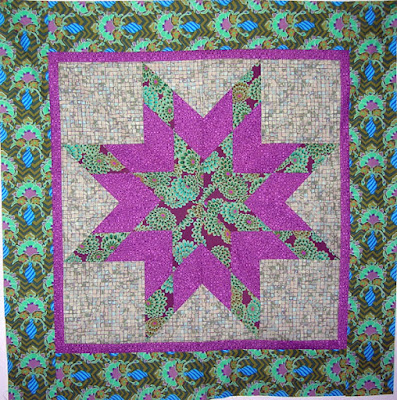 I'm retiring this workshop after teaching it for several years, so I thought I'd share a few pictures of the quilts I've made - and one made by my friend Jeannine. A kaleidoscope pattern is based on an 8-Pointed Star grid. What's that, you ask? Here's a simple 8 pointed star called LeMoyne Star. This is not an equal sized 9 patch grid. As Jinny Beyer says about this grid: "... all of the outer points are the same distance from each other." EZ Being Green from Supersize 'Em Quilts, 2009 Farm House West Stars as seen in Supersize 'Em Quilts Now for kaleidoscope! The angles are measured from the center, where the tip of the triangles measure 45 degrees. 8 triangles equals - wait for it - 360 degrees (a complete circle)! Single kaleidoscope block And here is the class sample I used. Blocks are 10" and the quilt size is 42" x 42". This is 1 of the 4 projects included in my pattern. Days to Remember Collection by Mary
Read more 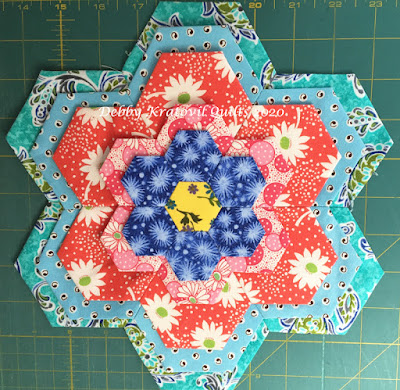 I have news for you: you probably have the EXACT tool/ruler to cut most fabric patches for English Paper Piecing (EPP). You don't need those specialty templates for each size. You don't need a triangle ruler for each size. You don't need an acrylic template for each size. While they are nice, they aren't necessary. And this will save you a lot of money - and time! (And if you don't have a 60 degree triangle ruler, I have them in my Etsy store ). 2" hexagons, 1-3/4" hexagons, 1-1/2" hexagons - and so on. Stack of various sizes of Grandmother's Flower Garden blocks My favorite ruler is an Olfa 6" x 12" acrylic ruler. It has those marvelous diagonal lines that you may not have thought much of. And the close second to that ruler is my multi-sized 60 degree triangle ruler in both 6-1/2" and 8-1/2" sizes. You probably have one, too. It could be a Creative Grids one or Fons and Porter. But it MUST have a blunted tip for it to
Read more