January 01, 2013
I plan on making the GIVEAWAY for this to be ALL of the 31 blocks in my challenge. I love the blocks, but I have to be realistic: If I haven't done anything with them in 11 years, what makes me think 2013 is the magical year? I would like to make it magical for one lucky winner. Read down to the bottom to hear about how you can win these and the remaining companion fabrics!

I pulled out a box of blocks I had made in 2002 when I got really motivated to make a block a day (gasp! yes, a block a day). Of course, I wasn't traveling and teaching then, though I was working part time and taking computer certification classes. But, hey, there's always time for sewing. Here are a week's worth of blocks and some notes I had taken while I was working on them. You can read the original story with tips on how to create your own challenge here:  Block a Day Challenge

Already had chosen a grouping of fabrics - the Fairy Collection from Benartex from 2000. Had small pieces to begin with, mostly fat eighths that I had already cut patches from. The first block is a 5” Album Block using lavender and yellow. Simple. Quick. Done.

Must have been too early in the morning. I mis-cut squares for my triangle units. So, I set them aside to be used for a future block. Sewed Sister’s Choice block and set aside. Decided to cut out patches for an entire future block so I can grab and just sew. (Found Monday’s Child in Judy Martin’s Ultimate Block Book. Cut the following patches: center square is on point, cut 4-3/4”; setting triangles, cut two 3-7/8” which will equal four triangles; cut two 4-1/4” squares which will be recut into four triangles each (total of eight triangles).)

I also discovered that I can keep parts of blocks, pre-cut units, pre-sewn units, patches for entire blocks in envelopes. Grabbed some old envelopes from husband for this purpose. Labeled each so I don’t get confused when I come back to them later. (It's not good to confuse a quilter.)

Had nothing to say on that day! 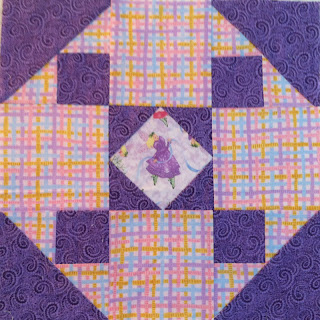 Yesterday, I cut out patches to make the corner pieced squares. Centered a lavender fairy on point as the central motif. The purple swirly print goes well with the lavender, pink, and gold plaid. Fun block. END OF THE FIRST WEEK!


The Giveaway
OK. You've come this far for the blocks for the first week of January. How can you win all of the 31 blocks (including these first 7)? Each week I will post about another 7 or so blocks; vote for your favorite block in the group, only once. You can come back the next week and vote for the second batch, and so on. The final week I will have a drawing from all the comments. You get to put your name in 4 times for 4 chances to win. (No more than 4; I will purge the list.)

You MUST be a follower. If I draw your name and discover you are not a follower, I will pick another name (it's my party and I make up the rules).

Next week I will show the companion fabrics that will go along with the blocks. You get the whole thing!