Christmas in July with Nordic Holiday and Fabric Giveaway

July 27, 2017
Amanda Murphy's Nordic Holiday fabrics (by Benartex Fabrics) is refreshing, modern and appeals to just about any quilter. Snowflakes, reindeer, bears and a non-traditional holiday color palette combine to inspire all sorts of patterns.

Amanda included a lovely reindeer in her collection.

I initially was going to bring out my Merry, Merry patterns from 2006. But then I thought "Lone Star."

Here are the set of fabrics Benartex sent me.

I call this easy because I took out all the y-seams traditionally associated with a Lone Star quilt.

I selected two fabrics with good contrast for my star center. I cut two strips of each. Offset the red one as shown here and sewed with 1/4" seam, pressing toward the red print . Using the 45 degree line on my ruler, I lined it up with the seam as shown below. Slice off the side. (This pattern can be found in my Etsy store for $6.00!) This makes a whopping 29" Lone Star.


Re-cut the wedges as shown. You are measuring from the CUT edge. Do NOT use the lines on your cutting mat for this. It's all in relation to your ruler.


Place the red diamonds at the pointed ends
Sew together and press seam open.
Make 8 of these units

Now we cut the setting triangles, large and small. Remember, there are no y-seams! I selected the wonderful gray scroll print.

Cut four small squares and four large squares. Recut each into two triangles each. You will now have 8 small and 8 large triangles.

Make 4 units that are the mirror image of the above unit. This is how they will look when sewn together.

Use your long ruler and the 45 degree line to help you slice off the excess large triangle. I also like to align the ruler markings for inches along one or more seam line. Sewing diagonal seams can be tricky!

And what does it look like with all those seams pressed? Here is the 29" star from the back.
Now for the borders. I wanted to use the reindeer print, but I only had enough for 2 borders (without chopping off parts of the reindeer!) So, I took that awesome red snowflake print and used that for the sides. Who says your borders have to match?

I also wanted to introduce a green. Inner border was cut 1-1/2". Outer reindeer print was cut (VERY CAREFULLY) at 6-1/2". The snowflake print only allowed me to cut two 5-3/4" strips. Again, who says your quilt's borders have to be the same size?! 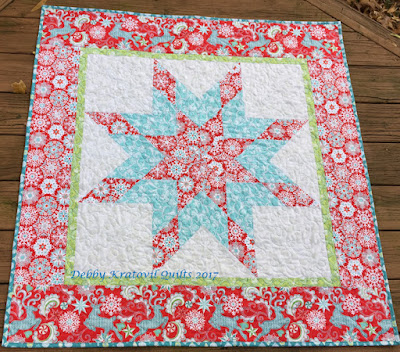 I also made some very quick, small projects using my new workshop pattern, Double Hexie Stars. Let me show you!


I couldn't toss the remaining bits of the red reindeer print. I cut 5 hexagons, set with triangles and this was given a few months ago as a housewarming gift for a newly wed couple.