Titan and Isadora: A Love Story (sort of)

December 20, 2017
I teased you last week with these lovely fabrics. Remember? I began a love story between Isadora and Titan.

This all began innocently enough, though they did meet in quite an unusual place: a warehouse in Jersey City, New Jersey (I'm not making this up). She was an orphan, with her entire family gone to new homes throughout the world. These homes were disguised as quilt shops. Somehow, she was left behind and she was desperately lonely. Her name is Isadora.

A younger man arrived in the warehouse and while he wasn't flashy, he was solid and down to earth and had quite a colorful personality. Titan was his name and he was immediately besotted with Isadora. Yes, she was a bit older (and maybe wiser), but they were looking for companionship.


And other gem shapes . . .
Isadora was outwardly shy, but she was secretly thrilled to get so much attention from such a handsome man. He offered her a tiara - no, two! He thought she was a beautiful princess and money was no object. Gold tiaras!

Then, Titan couldn't contain himself. She looked so beautiful with those gold tiaras that he lavished her with the other jewels - diamonds and gems surrounded her.

Titan lavished gems in other colors, just in case Isadora didn't like his first colors.

Ah, what a story, huh? It could have happened, right? I mean, we all still believe just a little bit in fairy tales of true love. Let me tell you about these lovely shapes and how I came to make them with JUST fat quarters.

You can see my November post about this block made using English Paper Piecing.  The inspiration for this block came from Katja Marek's Hexagon Block a Day Calendar: November 27.

I made a total of 9 blocks (you have to stop sewing when you run out of fabric - that's my rule!)

Now I played around with an assembly. I thought of a ring, but then I would have to make something to go in the middle. 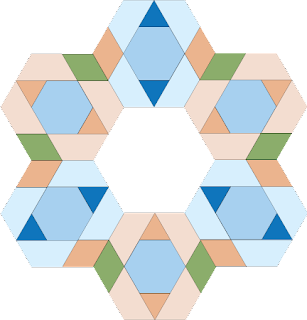 I thought of a table runner, but I have too many table runners! But when I put the 9 blocks in a simple 3 x 3 setting, it was too boring! Back to the table runner!!

When I put all 9 blocks into this assembly, it just seemed TOO LONG (as in 50"). If I added a triangle to the top and bottom, it would be 60". I left the blocks on my design wall overnight.  When I woke up in the morning, those nagging voices in my head told me that this is not that great. Voices in my head? Of course! And my New Year's resolution last January was to listen more to the voices in my head.

I went off to church and knew the answer would come to me when I got back home. Maybe it was a little heavenly inspiration?

What did I do when I got home? Are you sitting down? I took the whole thing apart (I had done a good bit of sewing)! What! You've never done that? Do you think if you don't like it when it's half sewn you're going to love it when it's complete?

Here are 8 of the 9 blocks (I may keep that top section for Plan B).

They will have to wait until after Christmas, because time is of the essence.

"Twas the week before Christmas and all through my house,
Were so many activities and a very needy spouse.
My sewing for others has me gasping for air,
But Titan and Isadora will still be a pair!"

I'm going to let these blocks percolate in my head. I will shuffle them around on my design wall. Titan and Isadora will tell me how they wish to be joined. I think it's a match made in heaven, don't you?