Snow Crystals is a vintage block from almost100 years ago. While it looks like 4 LeMoyne Stars, it actually is a variation with a bit of a "twist." One quarter of each star is turned 180 degrees so that when four come together they give the illusion of a 5th block in the center. 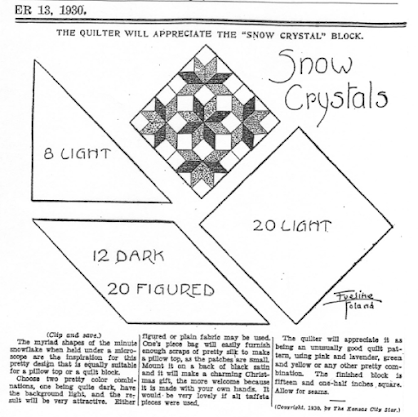 Here is my original quilt. Yes, the ENTIRE quilt is the Snow Crystals block (with borders added, of course). I designed it as a paper piecing pattern and it was a popular workshop for several years.

I played around with the paper pieced units using some batiks about 15 years ago. I added those purple inset strips, which again, were inspired by another vintage block. I have no idea where this block is anymore, but at least I have the photo! 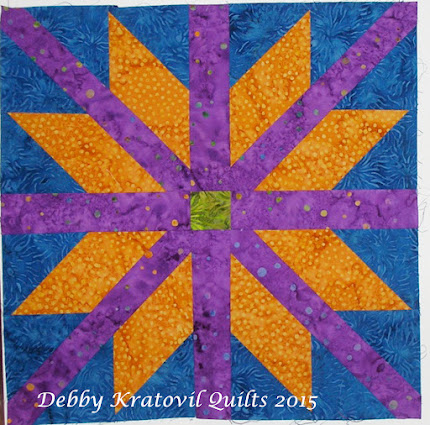 I made a few other Snow Crystal blocks and decided to set them on point. Here is a photo of the process and I have no idea if I even made the fourth block! Actually, that block on the top right is NOT a Snow Crystals block, but one of my Woven Ribbon Star blocks!

Then I discovered a block I had started last year and abandoned. It is a classic red and white. Here are four of the eight paper pieced units.

Then I misaligned the joining strip and had to start over! I had to wrack my brain to try and remember how I did it the first time (in 2005).

I got all the parts joined and then thought about how I want to finish it. Should it be upright? It will finish to 14".

Then I put it on point: 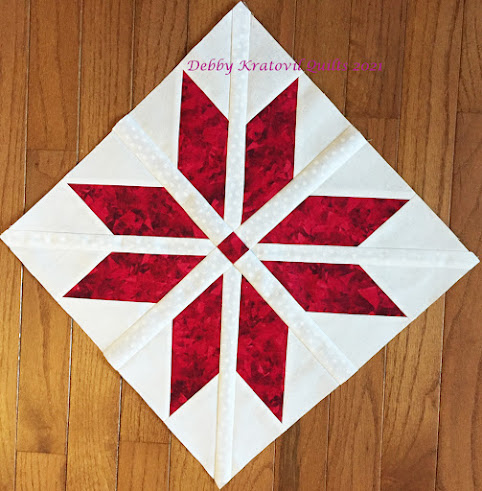 I have enough of the red fabric to use for finishing, but I don't have a strong sense of how to go, so this will sit quietly in my closet.

One last quilt. If you put Snow Crystals on point it will become Diamond Head. This was also in my 2nd book (Supersize 'Em Quilts, 2009). The blocks are 17".

Here is the sample block I had to send to the publisher so they could check my math, etc. I put extra sashing on it and I'm not sure how I will finish this. But, hey - It's waited 12 years, so it can wait a few more! I tried a mirror image treatment with the two fabrics.

OK. I'm done. Hope you enjoyed seeing my multiples of Snow Crystals! It is one of 13 quilts that was featured in my 2012 Wall Calendar of Quilts which you can read about here (and see several of the other quilts). Gee - I hope the use of the word "snow" doesn't start something here in Virginia weather-wise!